You must watch “Seaspiracy”.  (Says he after eating tuna from a “Dolphin Safe”, recyclable can)

It’s not easy to watch.  If you have children preview it first and then decide if you want them to see.

There have been a lot of comments attacking faults in the film.  In particular some Environmental Organizations feel they are wrongly portrayed.  You will need to make your own judgement.

This article by George Monbiot is a very good review.

Let me relate some minor personal experience in this area.  40 (+) years ago, I worked on a computer program for the Western Australian Fisheries Department.  I mention the years only to show that we knew the problems then – and the solution; stop or severely limit fishing.  That knowledge has been ignored by large parts of the global industry for a long time.

A simple diagram shows what happens under intensive fishing.  First, when stocks are plentiful the more you fish, the more you get.  Then comes a phase where no matter how hard you fish, you get no more. That is followed by a massive collapse.  We saw it happen with the Western Australian Salmon (not a relative of the “real” salmon) and to a lesser extent with the prawn fisheries in North-Western Australian waters. The over-simplified sketch below gives gives some idea of what I am talking about: 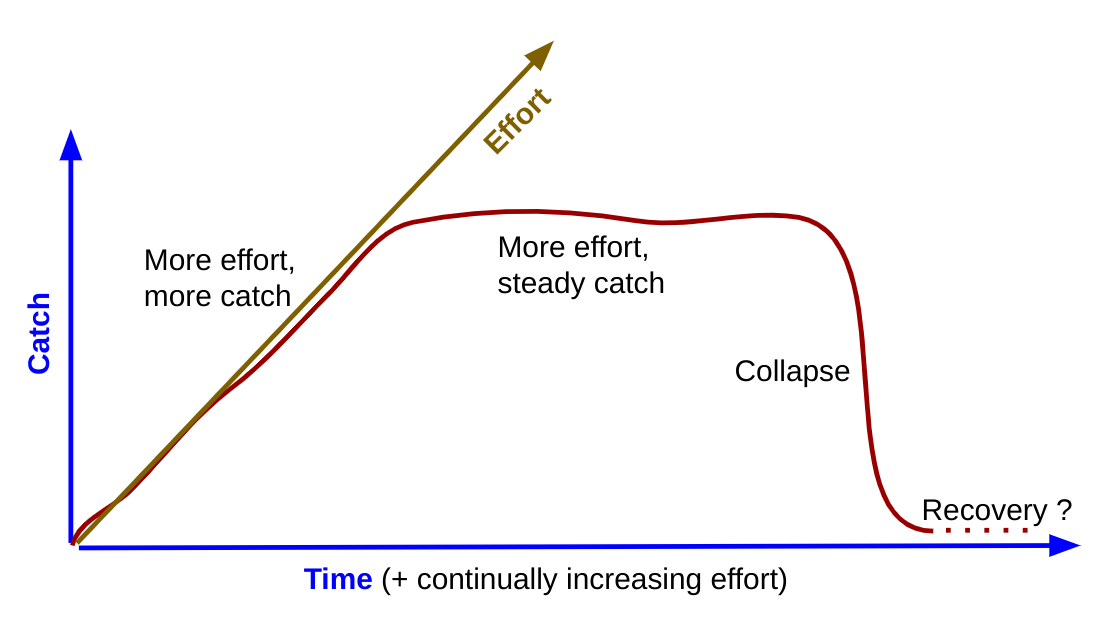 “Effort” is a combination of time spent at sea (transit time and actual fishing time), time the equipment is deployed, size and type of equipment (size of net, mesh etc. or length of longline, number of hooks etc.)

On the diagram “Time” is not scaled.  It depends.  The first 2 phases can be years or decades.  The collapse is sudden.  For the south WA (Western Australia) salmon fisheries the collapse happened very quickly (3 years? – I am happy to be corrected) and led to the effective abandonment of the shore based industry.

A similar trend is shown in the “Seaspiracy” film and is hinted at in Kipling’s “Captains Courageous” about the Grand Banks cod fishery in the late 1890’s.

The Grand Banks fishery has never recovered to the fabled times of the 1700 and 1800’s or the even more massive industrial hauls of the 1970’s.

The WA salmon has recovered, as have the prawns.  However the industry around the south coast has not grown back (again – I am happy to be corrected).  The prawn fishing is regulated.

Defendants of industrial fishing say that recovery does and will happen.  True, the species is not extinct, but it takes a drastic reduction, or total cessation, of fishing, plus a lot of time for the recovery.  In the meantime whole ecosystems are out of balance.  Also the people and communities who have invested their lives and their money in the fishing industry go through massive distress.

At about the same time as my little diagram, 40+ years ago, we would see Chinese and/or Taiwanese fishing boats in Fremantle (WA).  They came in to refuel and get supplies. They had lines strung fore and aft.  On these lines were hundreds of shark fins drying in the sun.  We shrugged our shoulders; the ocean was big and if they really liked shark fin soup, why not?  We did not know and did not ask what they did with the sharks. I thought they would be in the hold. Shark was good enough for the local fish and chip shop, so it was a reasonable deduction.  At the time we did not realize the sharks were just trash and thrown away, dead or alive.

Now of course the Chinese/Taiwanese boats are bigger and they get resupplied at sea.  So they can spend more time fishing and do not have to enter “hostile” ports where snoopy people may take photos or inspect their holds.

Which brings me to modern fishing.  I found this archived 2010 article in a surfing magazine.  It shows a kite installed on Germany’s largest fishing vessel the “Maartje Theodora” to make the vessel more efficient while in transit and during open ocean fishing operations.  According to a spokesperson: “As one of Europe’s biggest fishing companies, we consider it an important duty to not only promote sustainable fishing, but to take a leading role in making it a reality. For us, sustainable in this context means acting in a manner that makes both good economic and ecological sense”

Call me cynical but then we have this article from Greenpeace in 2012 – (summary translated from German): “14 Dec 2012.  German Fisheries Monster Caught in Illegal Fishing.

The largest European fishing vessel, the “Maartje Theodora”, was arrested by French authorities for illegal fishing. On board the German super trawler, the inspectors found two million kilos of fish that was caught contrary to European regulations. Greenpeace had previously criticized the shipping company for its fishing methods”.

Am I too cynical? You decide.